Here it is, the very first Unplaytested game, for which Alex and Lara do our very best to make an RPG that feels exactly like an episode of Naruto, a show which we do not watch but have seen commercials for. Were we successful in our endeavor?

Listen to us make this game!

Watch us play this game!

Important Note: As you might expect, this game is presented as-is: it's an unplaytested draft, and we have no idea what it will be like in the long-term. You're into strange territory here, proceed at your own risk!

In order to download this unplaytested game you must purchase it at or above the minimum price of $5 USD. You will get access to the following files:

Support this unplaytested game at or above a special price point to receive something exclusive.

Community copies are PDFs made available for free to those who, for whatever reason, are under financial hardship and unable to purchase one.

Let The Shining Power Of Your Heart Bring You Victory As Your Theme Music Plays is a GMless game built by guessing what Naruto is probably like. And now that I've calibrated your expectations, here's the stinger: it's really good.

Shining Power is 10 pages, black and white, with no illustrations but an extremely easy to read layout.

It's also surprisingly mechanically intricate despite being lightweight. Combats are handled by a short flowchart. There's character classes. You have something called a Will token which you can spend to win fights, and which you recover by losing fights. It's tight design, and does a good job of replicating the back-and-forth movement from victory to defeat that's present in (most) battle anime.

The writing of the game is very conversational, and a little unsure of itself, and it could absolutely get away with being more confident. There's a lot of cool flavor implied in the rules text, and there's a bunch of neat gimmicks embedded in the rules too---for example, your character class also comes with a roleplaying hook for the person on your left. There's also optional flirty combat.

Length-wise, this game is more or less as long as you want it to be. It has a built-in mechanic to trigger the end-game when no one can think of any more scenes to frame, and that's extremely neat. I'd guess that in most situations it wraps up in 1--3 hours.

Overall, this is an excellent game. If you like story (and especially character-relationship) focused gameplay, and if you don't need crunchy mechanics in your combat, and if you like at least some of the tropes orbiting peripherally around Naruto, you will have a lot of fun with this.

-What happens if two people spend their Will simultaneously to trigger their theme music? 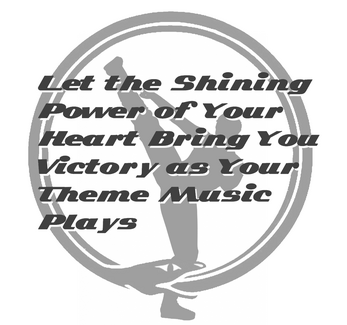